Budapest remains the center of the world, when it comes to wars, holocaust and some great diplomats who sacrificed everything save live of thousands of jews during the WW2.

There are some important monuments around budapest history, dedicated to diplomats who issued passport papers to save live of men, women and children. These diplomats were brave men who took their secret to graves deserving great respect and recognition.

If you visit #Budapest, be sure to visit this memorial statue dedicated to Carl Lutz, who saved 60,000 jewish lives during WW2 in the Jewish quarter of Dob street in Budapest. A major tourist attraction on Dob utca

Carl Lutz was the Swiss Vice-Consul in Budapest from 1942 until the end of World War II in 1945. Together with diplomats of neutral countries, such as the Swedish Raoul Wallenberg, the Apostolic Nuncio Angelo Rotta, the Italian Giorgio Perlasca, and others, Lutz worked relentlessly in his office set up in the U.S. Legation building for many months to prevent the planned death of innocent people.

He created safe houses by declaring them annexes of the Swiss legation and eventually extended diplomatic immunity to 72 buildings in Budapest, saving as a result of it more than 62,000 Hungarian Jews. In 1963 a street was named after Lutz in Haifa, Israel, and since 1991 a memorial at the entrance to the old Budapest ghetto remembers him. A memorial room was opened in 2005 in the Glass House in Vadász utca 29, Budapest V.

He was also awarded the title of “Righteous Among the Nations.” 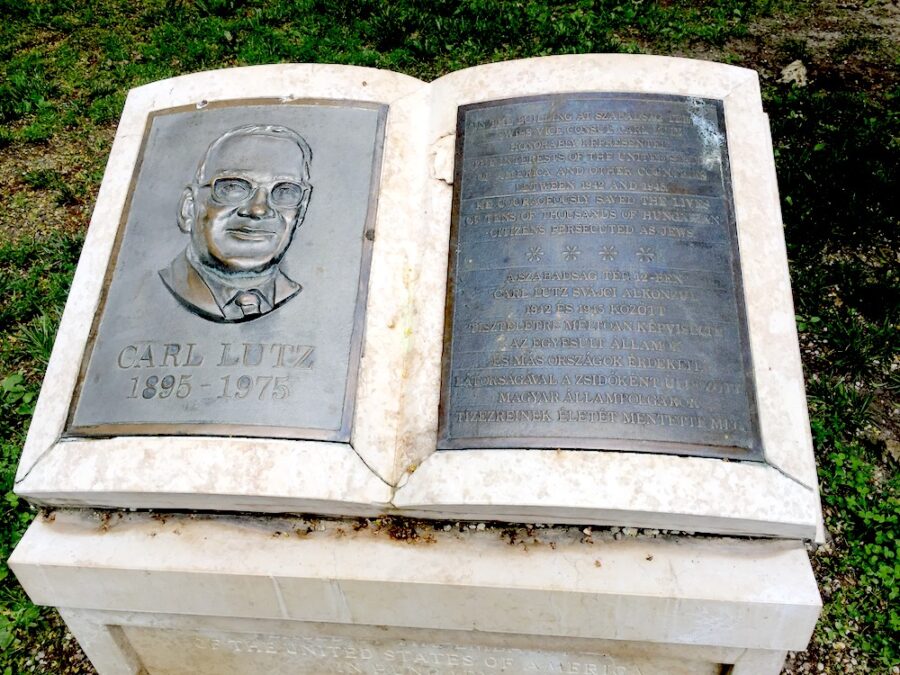 The inscription on the memorial reads:

In the building at Szabadság tér 12, Swiss Vice Consul Carl Lutz honorably represented the interests of the United States of America and other countries between 1942 and 1945. He courageously saved the lives of tens of thousands of Hungarian citizens persecuted as Jews.

Once the Nazis took over Budapest in 1944, they began deporting Jews to the death camps. Lutz negotiated a special deal with the Hungarian government and the Nazis. He gained permission to issue protective letters to 8,000 Hungarian Jews for emigration to Palestine.

Lutz deliberately used his permission for 8,000 as applying to families rather than individuals, and proceeded to issue tens of thousands of additional protective letters, all of them bearing a number between one and 8,000. He also set up some 76 “safe houses” around Budapest, declaring them annexes of the Swiss legation and thus off-limits to Hungarian forces or Nazi soldiers. Among the safe houses was the now well known “Glass House” (Üvegház) at Vadász Street 29. About 3,000 Hungarian Jews found refuge at the Glass House and in a neighboring building.

Lutz died in Bern, Switzerland, in 1975. Read more at US embassy website

Raoul Wallenberg a young diplomat issued Swedish protective passports to save thousands of Jews in 1944 issuing Yellow Schutz Passports. His fate is unknown. This small memorial dedicated to him at Deák ter in Budapest near the old bus stand.

Raoul Gustaf Wallenberg was a Swedish architect, businessman, diplomat, and humanitarian. He saved tens of thousands of Jews in German-occupied Hungary during the Holocaust from German Nazis and Hungarian Fascists during the later stages of World War II. While serving as Sweden’s special envoy in Budapest between July and December 1944

When Wallenberg reached the Swedish legation in Budapest on July 9, 1944, the intense Nazi campaign to deport the Jews of Hungary almost entirely to Auschwitz had already been under way for several months.

By the time of Wallenberg’s arrival there were only 230,000 Jews remaining in Hungary. With fellow Swedish diplomat Per Anger, he issued “protective passports” (German: Schutz-Pass), which identified the bearers as Swedish subjects awaiting repatriation and thus prevented their deportation. Although not legal, these documents looked official and were generally accepted by German and Hungarian authorities, who sometimes were also bribed. The Swedish legation in Budapest also succeeded in negotiating with the German authorities so that the bearers of the protective passes would be treated as Swedish citizens and be exempt from having to wear the yellow badge required for Jews.

With the money mostly raised for the War Refugee Board by American Jews, Wallenberg rented 32 buildings in Budapest and declared them to be extraterritorial, protected by diplomatic immunity. He put up signs such as “The Swedish Library” and “The Swedish Research Institute” on their doors and hung oversized Swedish flags on the front of the buildings to bolster the deception. The buildings eventually housed almost 10,000 people

The Raoul Wallenberg-memorial at the Dohány Street Synagogue in Budapest. Lutz’s name shows together with other heroes. 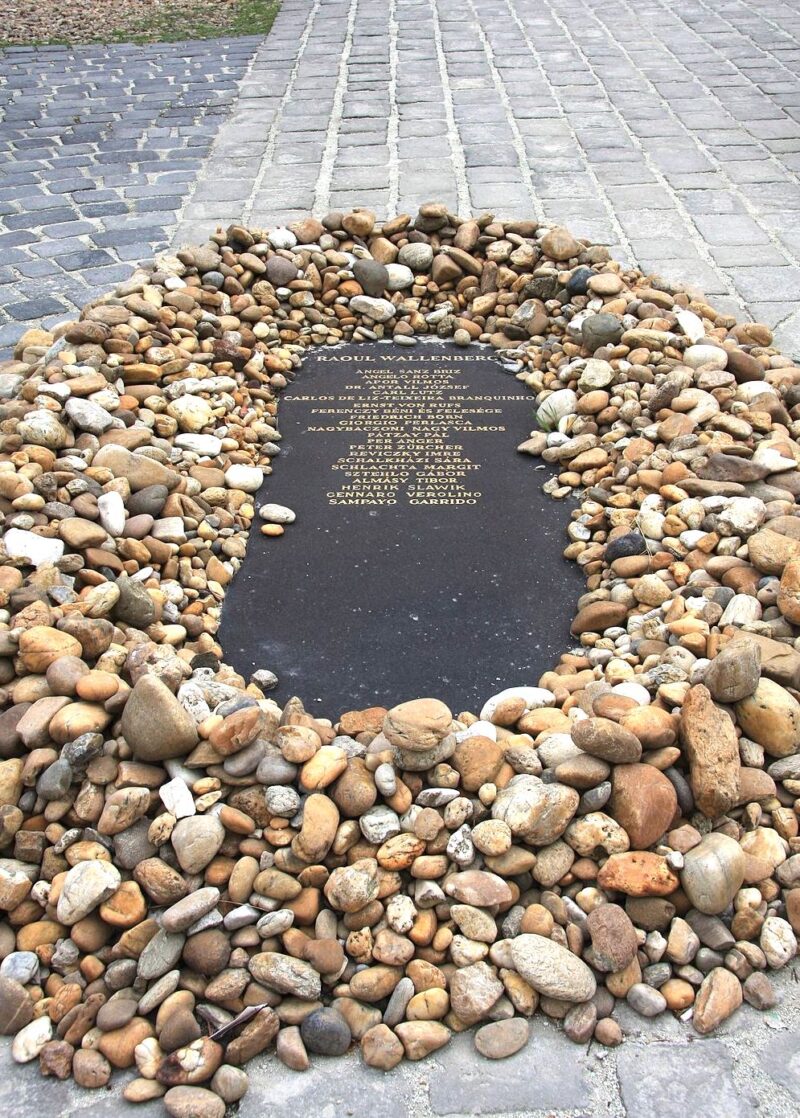 The Angel of Budapest

Ángel Sanz Briz was a Spanish diplomat who served under Francoist Spain during World War II. He saved the lives of some five thousand Hungarian Jews from deportation to Auschwitz

He was sent to Budapest in 1942 where he was the first secretary of the Spanish legation.

This is a memorial recently opened in Budapest .

The Spanish embassy maintains a list of tourist attractions and monuments 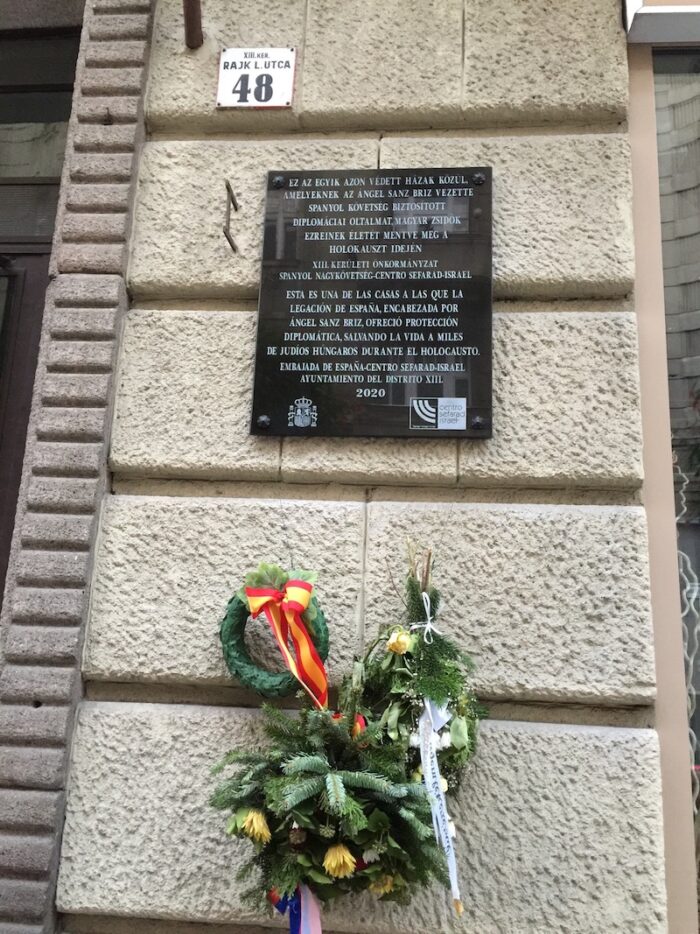 Between June and December 1944, he and his assistants issued fake Spanish papers to 5,200 Jews, saving them from deportation to concentration camps. he initially received authorization to provide papers to 200 Jews, and continued to enlarge this amount until he reached 5,200. In some cases, he acquired houses in Budapest at his own cost in order to provide shelter for the refugees, which made the difference between life and death for those Jews.

In 1991, he was recognized by the Holocaust Museum Yad Vashem of the State of Israel, who gave his family the title of Righteous Among the Nations. In 1994 the Government of Hungary gave him the Cross of the Order of Merit of the Republic of Hungary. In 2015, a Budapest street was renamed in his honor, as Angel Sanz Briz Avenue.