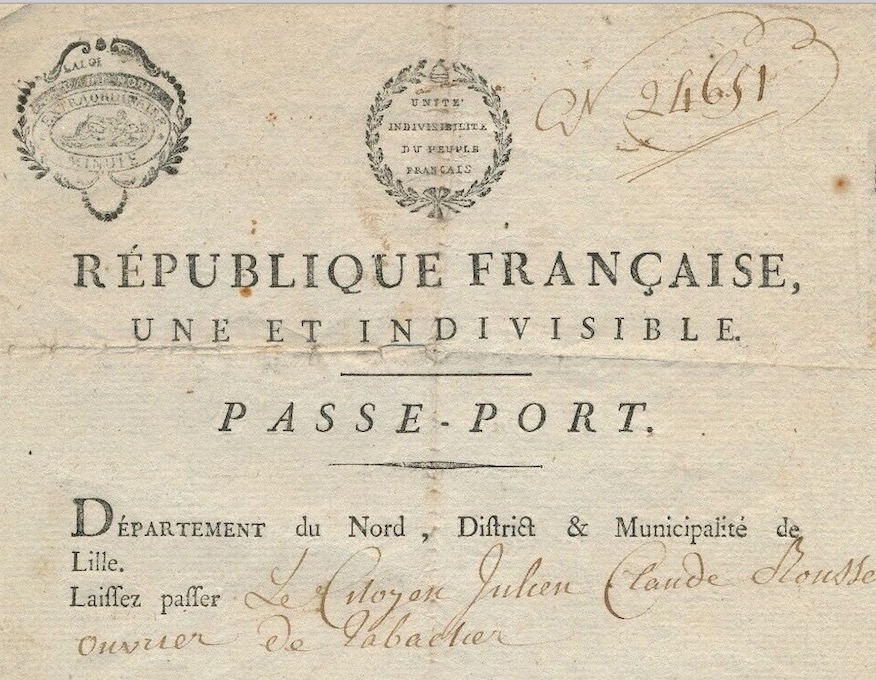 This is an extremely rare  passport issued in 18th century during the period of French revolution. This is a musuem exhibit

This is a laissez-pas passport issued in Lille in Feb 26, 1794 by the Nord department ( municipality of Lille ) for citizen named Julien Claude Roussel. The city of Lille was part of northern tip of french empire one of the oldest cities in France founded in 2000 BC

This document was issued two years after  First French Republic which was founded on 22 September 1792 during the French Revolution and ended in 1804. Napoleon seized power in 1804 creating First French Empire

The French Revolution Révolution française was a period of far-reaching social and political upheaval in France and its colonies beginning in 1789 ran for 10.5 years  finally ending on 9 November 1799 under dictatorship of Napoleon. The Revolution overthrew the monarchy, established a republic, catalyzed violent periods of political turmoil, and finally culminated in a dictatorship under Napoleon who brought many of its principles to areas he conquered in Western Europe and beyond 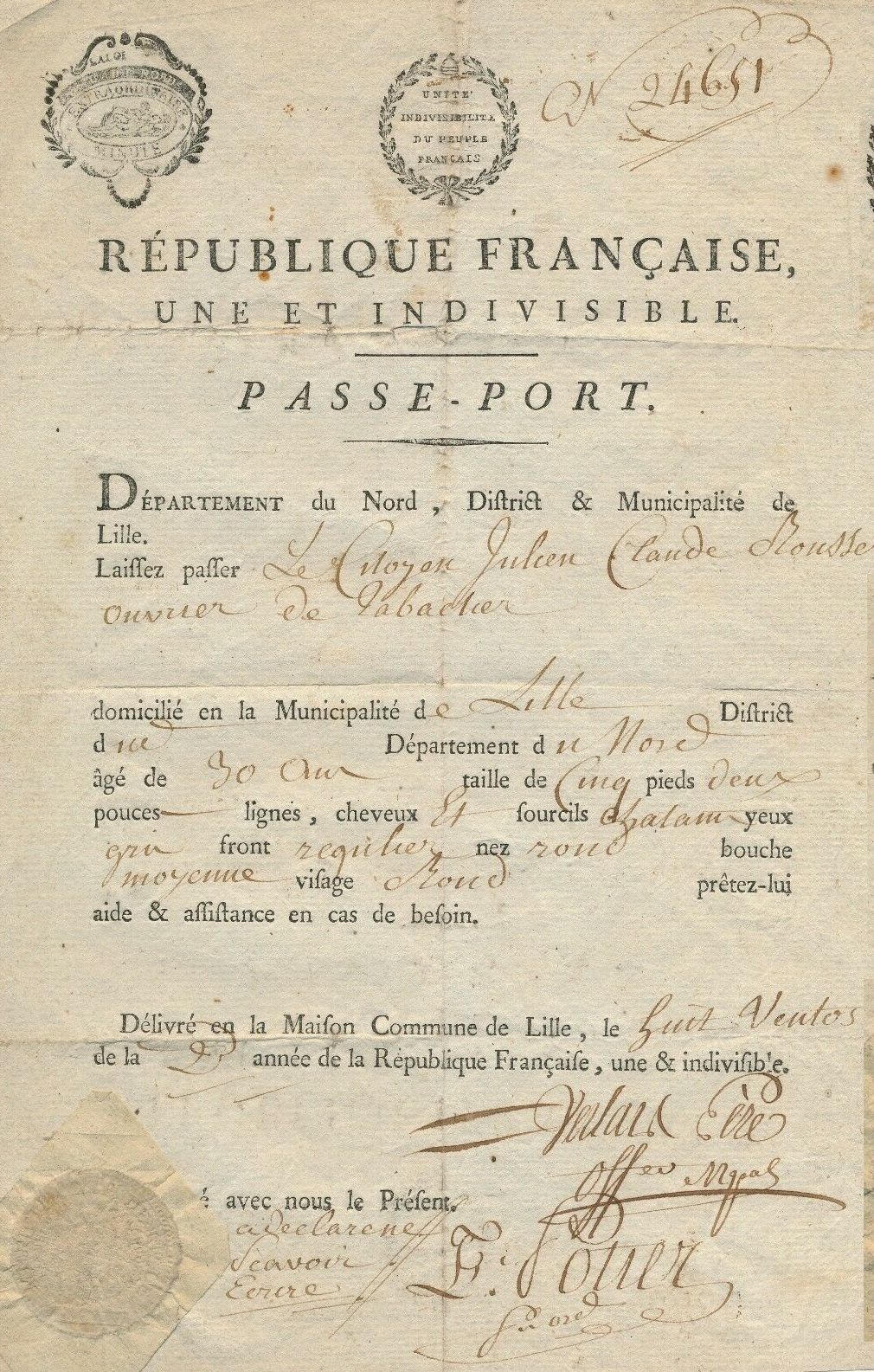 You will see the motto of First french republic in the document “Une et Indivisible” which means one and undivided.

Below is the stamp showing reclining woman holding a caduceus, “45 centimes.” used during the french revolution.  Based on typical iconography, this could be a representation of the goddess Iris, who served as a divine messenger among other things, though this would be a fairly grand way of heralding an item’s cost.

The French Republic (République française), was founded on 22 September 1792 during the French Revolution. The First Republic lasted until the declaration of the First Empire in 1804 under Napoleon (born in 1769)

The French revolution was a period of violent political turmoil during 5 May 1789 – 9 November 1799 which began overthrowing the monarchy and culminating in the dictatorship of Napolean. This is a very important period in french history.

You will also see the document uses French republic calendar. It says the document was issued on  huit, ventos, in the second year of First french republic. Ventos is a winter month and each week.  The republican calendar was used only for 13 years before  abandoned by the Napoleonic regime on January 1, 1806 and replaced with Gregorian calendar. This makes it even more unique.

The First French Empire, also known as the Greater French Empire or Napoleonic Empire, was the empire of Napoleon I of France. It was the main power of most of continental Europe during the early 19th century.

From 1793 to 1815 France was engaged almost continuously (with two short breaks) in wars with Britain and a changing coalition of other major powers. The many French successes led to the spread of the French revolutionary ideals into neighbouring countries, and indeed across much of Europe.

Napolean was the emperor of French from 1804 until 1814 and again briefly in 1815 during the Hundred Days. Emperor of the French was the monarch of the First French Empire and the Second French Empire.

Napoleon dominated European and global affairs for more than a decade while leading France against a series of coalitions in the Napoleonic Wars. He won most of these wars and the vast majority of his battles, building a large empire that ruled over much of continental Europe before its final collapse in 1815. He is considered one of the greatest commanders in history, and his wars and campaigns are studied at military schools worldwide. Napoleon’s political and cultural legacy has endured as one of the most celebrated and controversial leaders in human history. He orchestrated a coup in November 1799 and became First Consul of the Republic.

The period known as the French Consulate began with the coup of 18 Brumaire in 1799. Members of the Directory itself planned the coup, indicating clearly the failing power of the Directory. Napoleon Bonaparte was a co-conspirator in the coup, and became head of the government as the First Consul. He would later proclaim himself Emperor of the French, ending the First French Republic and ushering in the French First Empire

Before the proclamation of the First Republic, France was engaged in war with Prussia and Austria. In July 1792, the Duke of Brunswick, commanding general of the Austro–Prussian Army, issued his Brunswick Manifesto, in which he threatened the destruction of Paris should any harm come to King Louis XVI of France.

In 1792, in the aftermath of the French Revolution, the Austrians, then in the United Provinces, laid siege to Lille. The “Column of the Goddess”, erected in 1842 in the “Grand-Place” (officially named Place du Général-de-Gaulle), is a tribute to the city’s resistance, led by Mayor François André-Bonte. Although Austrian artillery destroyed many houses and the main church of the city, the city did not surrender and the Austrian army left after eight days.

On 26 February, 1794, same day the document was issued – Ventôse Decrees, proposed to confiscate the property of exiles and opponents of the Revolution, and redistribute it to the needy.

French republican calendar, dating system that was adopted in 1793 during the French Revolution and which was intended to replace the Gregorian calendar with a more scientific and rational system that would avoid Christian associations. It was presented by Pierre-Sylvain Maréchal in 1788. Each of the 360 days in the year was named for a seed, tree, flower, fruit, animal, or tool, replacing the saints’-day names and Christian festivals.

The republican calendar was used only for 13 years before  abandoned by the Napoleonic regime on January 1, 1806 and replaced with Gregorian calendar. 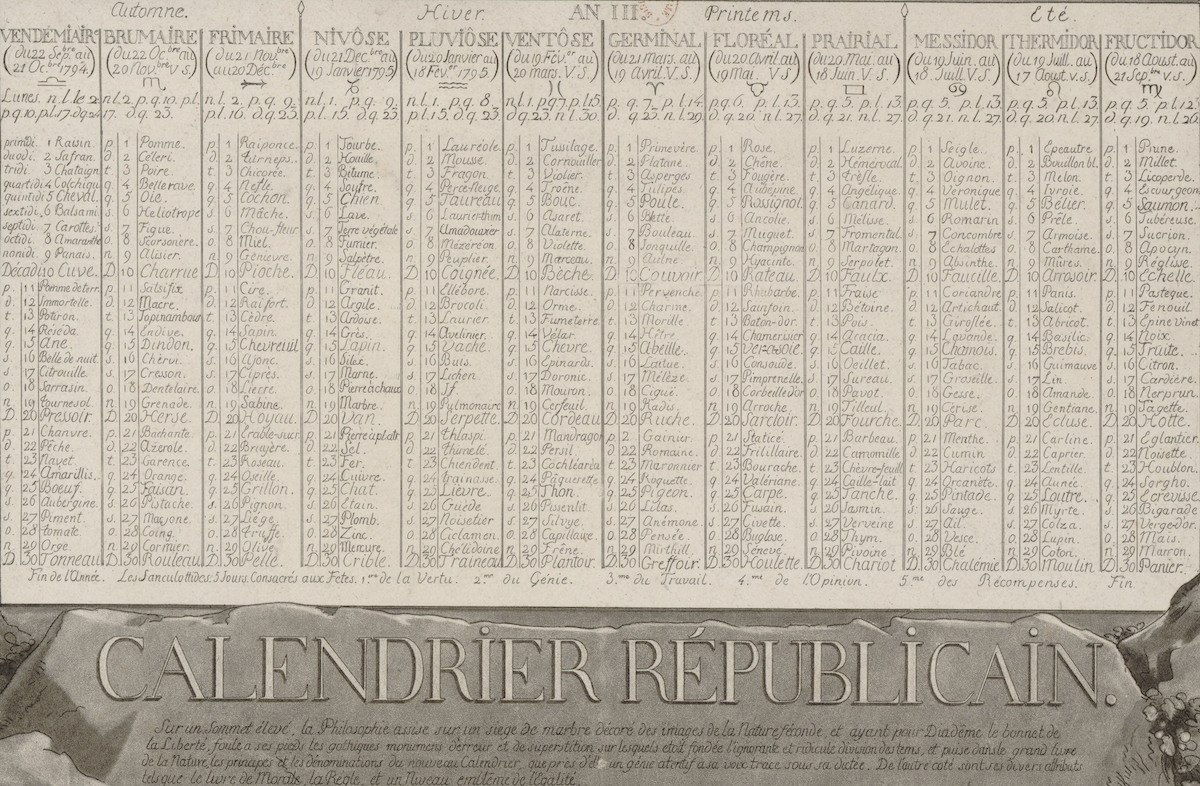 The Livre (French for “pound”) was the currency of Kingdom of France and its predecessor state of West Francia from 781 to 1794. The last coins and notes of the livre currency system were issued in Year II of the Republic (1794). In 1795, the franc was introduced, worth 1 livre 3 deniers (​1 1⁄80 livres), and the first one-franc coin was struck in 1803. 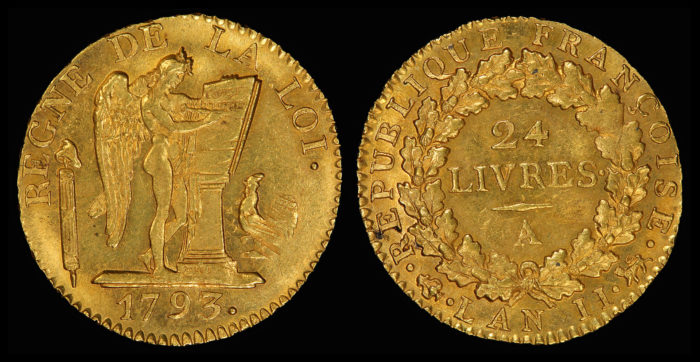 The other information in the document, such as who signed it, the purpose cannot be determined due to difficulty in recognizing handwriting